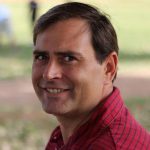 My very first gaming convention was in Lake Geneva in 2012. It changed my life and switched its focus. At GaryCon I finally recognized what the late Gary Gygax had done for me. As a boy Dungeons & Dragons was about bringing dreams into reality, the people I have met have showed me it was true for adults too. Great people, an unbelievable community and constant encouragement gave me a miracle. I went from morose and adrift to my dream job. One that that would not have exist without the industry forged by Gary Gygax.

It started on a hot summer day in 1981 when I begged my poor mother to buy me the Moldvay Basic Box. I was relentless even I did not know anyone who had a copy nor did I have the slightest idea how Dungeons & Dragons was plated. It’s influence on my life continues this very minute. More  and richer experiences are Gary’s gifts to us all. For all of us his creations have obsessed, influenced, and given us the tools to slay the metaphorical dragons that exist in each of our worlds. Gary gave me the keys to pursue a life driven by creativity and the permission to use it in unexpected places- an amusing metaphor considering he never drove anywhere. It is an apt one though as without the spark his games ignited I doubt I would have found my voice. The challenges thrown at me by many dungeon masters helped solve problems in roles ranging from military combat training to gubernatorial political staffer to my new career.

Gary’s game, his companies and now, thanks to his family, his friends, and the GaryCon community have given me more than I can repay. The fans of the game created by Gary and Dave are my friends, my people if you will, world-wide.  Gary shared with us a love of science-fiction and fantasy which was combines with a love of words i.e. our shared language.

We have too many similarities and formative experiences to just be a gaggle of people rolling dice. Many of us were shy and socially awkward. We were members of an out group when being in an in group seemed so important to our peers. As comrades we banded together around a hobby. We passionately argued amongst ourselves the meaning and purpose of complex rules. To better understand them we would study reference literature, learn complex statistics, and study science to better simulate a reality we wanted. Then we turned this stack of skills into tools for teamwork and problem solving against dragons- metaphorical and imaginary. That experience isn’t an escape for social outcasts, it is a formula for growing up to face challenges and find success.

During my two decades away from tabletop gaming I still used Gary’s gift of confidence and creativity. It is said that ‘Politics is war by other means’.

I worked in pretty high level politics and can say unequivocally that it was a breeze compared to the Tomb of Horrors. Gary’s games taught me to build better teams, form realistic goals and include every stakeholder in an outcome.

Not bad for a nerd. Thanks Gary.